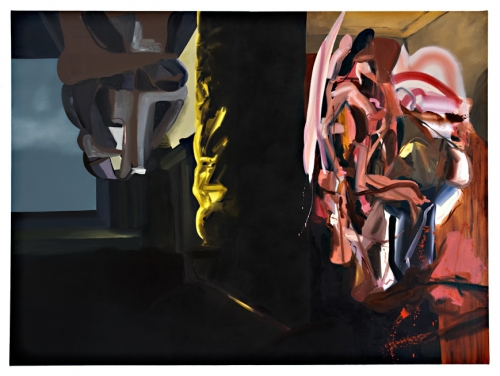 “We work in the dark – we do what we can – we give what we have. Our doubt is our passion and our passion is our task. The rest is the madness of art.”

Night is a moment of acute aural sensitivity. It is never silent. On the contrary, the thick mantle of darkness isolates and samples sounds: like a soft velvet mounting, it surrounds them with clarity, lets us hear them in their fullness. And the human ear, which is more in the habit of snatching noises from the hubbub of the daytime bustle, is not used to having its work half-done for it. Just as an overemphasis on honesty makes us suspicious, so the purity of noises at night makes us wary: obviously, things cannot be what they claim. Hence the anxiety and even the terror felt when a familiar sound suddenly rends the fragile veil of sleep. In Suddenly in the Depth of the Forest by Amoz Oz, the noises of the animals wandering through the alleys terrify several generations of villagers who shelter indoors as soon as it grows dark, and yet the reality is so much simpler. This is an inevitable human reflex: we hear only what we want to hear. In the same way, we see only what we want to see. Like all the other senses, sight is also affected by the night. Suffused with pale moonlight or rawly revealed by neon and naked bulbs, familiar things are transformed. In Stephen King, it is always at night that things take power over humans. In Possessed by Witold Gombrowicz, a cloth blowing limply in a draught in the tower of a castle is enough to chill with horror the protagonists (and the reader) of the novel.

At night, our “visual hearing” is singular. Buffeted by fatigue, the painter builds a rampart of intense concentration, as favoured by the seeming quietness. But while his extreme attention to his object may allow him to see it thoroughly, to inventory every aspect, in the end it always catches on some detail, something that gives the object its nocturnal strangeness and leads him to digress, takes him down incongruous byways. The point, in a sense, is to isolate the “background noise” from the object. It is as if the latter, having been examined from every angle, is now viewed only out of the corner of his eye. And it is now, as his salutary exhaustion surreptitiously leads the artist down unexpected paths, that he regains control, channels his wanderings and gives form to his visions and hallucinations. Night extends the reign of metamorphoses and fertile misinterpretations – Salvador Dali elevated this phenomenon to the status of method: his famous “critical paranoia.” Never mind rationality: reality is less interesting than its phantasmagorical translation. Night remains the realm of dream, even if dreamed with eyes wide open. Artists are well aware of what they owe to the state of semi-consciousness to which “nocturnal vision” can lead them.

The Late Night Paintings by Les Rogers were painted precisely at the time their name indicates, in his new studio in the New Jersey countryside, just by a river and close to the ocean. Each one captures a certain nocturnal ambience fuelled by visions. And the artist’s deliberate attention to the “background noises” has the effect of considerably amplifying the abstract quality of the resulting images.

These visions are sometimes rooted in old masterpieces – a few years ago, he memorably reinterpreted Gustave Courbet’s The Desperate Man. Here, New York Movie draws on the eponymous canvas of the same name by Edward Hopper. With Rogers, the melancholy usher gives way to a tangle of colourful forms, as if the tangle of thoughts in which she seems bound as she stands to the side of the cinema had suddenly taken on a material form, while at the same time, the spectators sink into the half-light, their disappearance further heightening the young woman’s solitude. Summer Night derives from the famous Winslow Homer painting at the Musée d’Orsay. Rogers’ rendering of the phosphorescent surf is almost supernatural, while the two women dancing theatrically on the moonlit sea wall become a kind of coastal fire, incarnating the burning dizziness of festivity, of an unforgettable ball on the ocean shore.

Other paintings were inspired by scenes he himself witnessed, by objects and fragments of life that may seem banal, but become uncanny when seen at night. We cannot always identify the protagonists of these muted dramas. How are we to interpret the central object in Mental Furniture? Is it a lamp? A wine decanter? And what do we see in Bare Evening, the composition of which evokes the enigmatic Parisian paintings of Chabaud at the turn of the twentieth century? And Bulkhead? Is it one of these masses formed by the objects carried and deposited by a river in one of its more slow-moving reaches? Or is it the robot of the same name from the film Transformers, capable of metamorphosing into a helicopter gunship? In these paintings—more, no doubt, than in the reinterpretations of past works, because we do not know the images he is referring to—the abstract treatment makes us deeply uncertain about what we are seeing. Not really figurative, but not completely abstract, either, Rogers’ painting surfs the wave between form and formlessness. So why, in these Late Night Paintings, should he need to resolve things one way or the other? The best painters have always been skilled walkers of the tightrope between such rigid categories as “abstraction” and “figuration,” refusing to come down on one side or the other. They thus maintain doubt and avoid the trap of literality that lays everything out upfront and in the end gives us nothing, limiting the freedom of both artist and beholder, and fencing in the field of possibility. When we are told precisely what to look at, what is left for us to see?

Philip Guston knew this problem well. He moved back and forth between figuration and abstraction several times, and held “the freedom to do what you feel like doing” as the supreme value for an artist. Guston, too, has often been cited as Roger’s major reference. In addition to the heaps of unlikely objects he painted in the last ten years of his life, the chaotic figures of his younger works also come to mind. At night, Guston would paint scenes taking place in a space reminiscent of his studio. This theatrical space was generally lit by a single bare bulb hanging from the ceiling, which symbolised the Renaissance idea: inspiration. In Guston’s late paintings, the motif of the studio at night clearly constitutes a perfect metaphor of the artist’s mental activity. It is as if a micro-camera were revealing every fold and crevasse of his cortex. Looking at Barn Studio, which shows a window and corner of Rogers’ studio, it would seem that the whole series of Late Night Paintings can be seen in relation to this same philosophical tradition of the mental studio, an internal laboratory where experiences, transformations and hallucinations are acted out before acquiring concrete form in the real-world studio. Indeed, we may wonder, is not the subject of the Late Night Paintings ultimately the artist’s own way of working?

One painting contrasts clearly with the rest of the exhibition, for it is much more overtly representational (and why shouldn’t Rogers paint like that as well?). Titled Emma, it shows the face of a young blond woman kissing a man, who is outside the picture. Is this the artist’s girlfriend? The moment before or after an embrace? Although the treatment is more realistic, the image itself remains mysterious. But it may perhaps suggest, quite simply, that if night is the territory of those multifarious visions and fantasies that are then transcribed in the hours spent at the canvas, it is also the time of love. There is a life after the studio, after work: with dawn glowing, his brushes finally downed, the painter goes to bed.

Richard Leydier is a contributing editor at artpress.